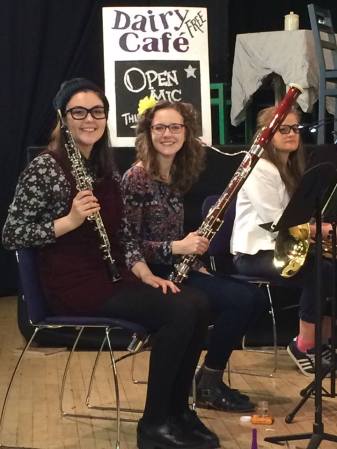 Last month I was lucky enough to play bassoon in the orchestra for the UoB Gilbert & Sullivan Society’s production of ‘Patience’.  With three performances from the 28th-30th January in the Deb Hall at the Guild of Students, both the chorus and orchestra entertained audiences with panache and humour.

The production follows the character Patience to whom love is simply a ‘closed book’.  This is problematic for Bunthorne, an aesthetic poet who only has eyes for Patience, despite the mass of admirers who incessantly pursue him.  Director Jessica Dalton developed an innovative modern interpretation of the traditional show, casting Patience as a waitress in a café surrounded by smart-phone fanatics glued to the internet and bearded hipsters complete with beanie hats and braces.  The modern twist alongside the the original Arthur Sullivan music and William Gilbert librettos gave the performance a sense of tradition and modernity, making the show relatable to all audience members from students to grandparents.

In a small orchestra of strings, wind and brass directed by third year music and maths student, Jamie Naylor, we rehearsed and performed alongside the singers.  One of the great things about any Gilbert and Sullivan show is that the entire cast can be involved and have a fair share in the performance.  This was definitely so for the orchestra, providing musical accompaniment but equally having more limelight moments in the overtures.

As orchestra members we positively felt like a part of the action on stage and the overall setting especially in our hipster concert dress.  We certainly enjoyed ‘hipstering up’ with the cast for the performances!

Playing in an orchestra or pit band for a show is a considerably different experience from playing in a traditional orchestra, requiring awareness of performers on stage as well as musicians around you.  Being in the orchestra for this production was a lot of fun and the musicians become a sort of pit orchestra family!  After the rehearsals and performances the entire orchestra are nearly word perfect in the songs and honestly would join in with the chorus numbers if we weren’t playing ourselves!

Being a part of this G&S production was really good fun and a great way to begin the second semester.  Involvement with a show is a nice way to meet new people and share a passion for music and performance.  I would encourage anyone to give it a try.  Productions such as this require huge amounts of creativity from casting, acting, singing, playing music, lighting, set design and many other factors, but are exciting opportunities to bring people together combining many skills to create memorable performances.

This production exemplified the abundance of creativity at UoB and the joy that students take in working together to create brilliant opportunities and events.